Perfume River – The storyteller and truth 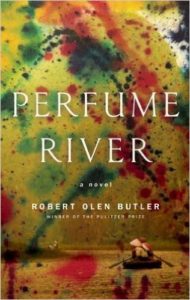 The Storyteller and Truth

The novel is a pack of lies hounding the truth. Carlos Fuentes

Robert Olen Butler is in my estimation the finest living American author and his just released book, Perfume River, his finest novel. It is sense-making of a time––the Vietnam War––when facts and counter-facts filled the air. It makes sense of a generation’s disputation, inner and external, circa 1962-1972 when men ages 17-27 decided whether to go or not to go, whether to step forward or step aside.

Perfume River gives sense to young men struggling to decide which way to step. Perfume River is sense-making in our time when fact-checking has become an American cult, competing fact-checkers shouting out chosen ‘truths’ like back-woods fundamentalist preachers shouting out biblical verse against the back-sliders.

What are Robert Quinlan and his wife feebly arguing about when the homeless man slips quietly in? Moments later Robert could hardly have said. ObamaCare or Quinoa or the granddaughter’s new boyfriend. Something.

Robert Quinlan and his wife, Darla, speak to one another, their words didactic, instructional, teaching (they are professors), but they do not listen. Robert, the professor, his father, William, a laborer, and Robert’s brother, Jimmy, a draft dodger, speak haltingly to one another, not comprehending, not bothering to comprehend. Bob, A homeless mentally-ill man, talks to himself.

Such communication as does occur is non-verbal; a touch on the shoulder, a step to the fore, a self-inflicted gunshot to the temple. Robert, the professor, touches Bob, the homeless man, on the shoulder, to offer the gift of food, and Bob, understanding the gift, accepts. Robert touches his wife’s hip while she sleeps so as not to explain his touch. Darla sees Robert wake troubled and leave the bed. The narrator interprets her inner monolog.

She would speak, but she does not want a conversation that would wake her up once and fore all. If there is something on his mind and he is choosing not to volunteer it, it can wait till morning. She turns on her side, putting her back to him.

Robert wrestles with an issue, the unblooded infantryman’s issue – is he a coward? The third person narrator voices Robert’s internal dialogues and self-judgment. He went to Vietnam, but finagled a non-combat job, thus, he was a coward. To have fled to Canada would have been principled at least. The Tet offensive enveloped Hue and enveloped Robert. He was scared and thus unworthy. His wounds are the infantryman’s wounds. Not a Red Badge of Courage wound, but a wound no less.

PTSD in its current nomenclature has been recorded since man recorded combat. Here, a National Institute of Health paragraph on combat stress:

Mankind’s first major epic, the tale of Gilgamesh, gives us explicit descriptions of both love and posttraumatic symptoms, suggesting that the latter are also part of the human fundamental experience. After Gilgamesh loses his friend Enkidu, he experiences symptoms of grief, as one may expect. But after this phase of mourning, he races from place to place in panic, realizing that he too must die. This confrontation with death changed his personality.

PTSD has surely existed since man lifted his first stone in mortal combat.

There are no facts, only interpretations. Friedrich Nietzsche

Robert’s decision to enlist came from a deep need to please his father, William, a conservative blue-collar combat veteran of World War II. Volunteering gives Robert the right to choose his assignment, and he chooses a “safe” one, far from the jungle. By contrast, his once-beloved brother, Jimmy, defies William, concluding the old man will never grant love or approval to anyone, and flees with his hippie girlfriend to Canada, where he cuts off contact with his family.

This is not how Perfume River speaks to me. Mr. Mabe may articulate one or two lines of Robert Quinlan’s internal disputation, but a 400-word journal digest can hardly do justice. I find the Quinlans––Robert, Darla, Jimmy as well as the third-person narrator––unreliable witnesses. I doubt their assessment of self and the world around them.

Darla Quinlan, an academic art historian, is bemused at the repressed sexual longing of the Confederate women exemplified by a monument that calls to her mind an erect penis, the draped Confederate flag a condom, the etched words florid.

Let this mute but eloquent marble testify to the enduring hardness of that living human wall of Florida soldiery that stood during four long years of pitiless war – a barrier between our homes and an invading foe. 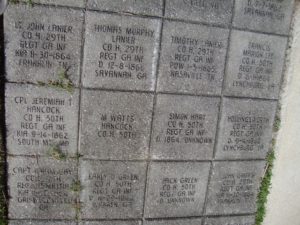 Darla is an outsider, a New Yorker and an academic, unfamiliar with local folkways.  As they’d say, ‘Y’all not from around here, are ya?” There is an alternative interpretation.

My paternal side, English-Scots borderers from fifty miles either side of Hadrian’s Wall, settled northern Florida and southern Georgia, a region which include Monticello, Florida, the novel’s milieu. My great -grandfather enlisted on the Civil War’s first day with the Colquitt’s Rifles, recruited from around Moultrie, Georgia, the Colquit county seat about 40 miles up the road from Monticello, and served the duration and surrendering with Kershaw’s Brigade at Appomattox Courthouse, Virginia. The names etched into the marble of the Colquitt County Courthouse war memorial are Scots and Scots-Irish.

David Hackett Fisher’s monumental Albion’s Seed: Four British Folkways in America describes the ‘red-neck’ and ‘cracker,’ vassals to the warrior lords of northern England and southern Scotland,  immigration (1706-1771) to North America when the unification of Great Britain with Scotland (1706) rendered these vassal warriors bereft of their thousands-year long occupations. Misfits in their homeland, misfits in the civilized English societies of the seaboard colonies, these uncouth were passed through to the borderlands to practice their millenniums-long occupation––fighting savages, like themselves. The role of men was to fight. The role of women was to produce fighters. The women who commissioned Darla’s monument understood that imperishable valor was fundamental to the survival of borderers. Scots, Serbs, Ukrainians––border people are “born fighting.”  Sexual longing? Nope. Captain Lot Townsend sired seventeen children with five wives. Life was harsh and you need them boys.

Maria Popova in her essay Walter Benjamin on Information vs. Wisdom and How the Novel and the News Killed Storytelling notes:

I think often, and with billowing concern, about the role of storytellers in helping us cultivate wisdom in the age of information — a task increasingly challenging and increasingly important as we find ourselves bombarded with bits of disjoined information, devoid of the sense-making context that only deft storytelling can impart.

Here one begins to sense a fundamental difference between a great storyteller and the great journalist. William, in death as in life the uncommunicative father, is dying. In the father’s lifetime absence, Robert and Jimmy seek clues in his occasional beery tears; haruspication would have been more rewarding.

Walter Benjamin in the original essay, The Storyteller: Reflections on the Works of Nikolai Leskov and to which Maria Popova refers above notes:

Actually, it is half the art of storytelling to keep a story free from explanation as one reproduces it… The most extraordinary things, marvelous things, are related with the greatest accuracy, but the psychological connection of the events is not forced on the reader. It is left up to him to interpret things the way he understands them, and thus the narrative achieves an amplitude that information lacks.

Robert Olen Butler’s novel Perfume River speaks to us, ages 17-23, who, air and airwaves of the time  filled with facts and aware of all the arguments pro and con,  with great uncertainty went to Vietnam. We, marshaling those arguments a 20-year-old is capable of marshaling, went. Other went to graduate school. Some few went to Canada. 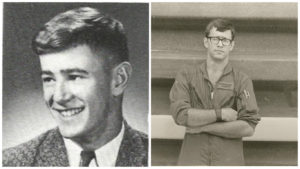 This callow farm boy was dropped unceremoniously into a social, political, artistic caldron, the University of Wisconsin 1965-1969, hotbed of anti-war sentiment against America and the War in Vietnam. I sorted through the rage, pleading, weeping and blandishments of the public space, of my nineteen-year-old Princeton girlfriend, a family oral history of twentieth-century Communist-Socialist genocides, and my own lust for adventure. I made my decision. I went. 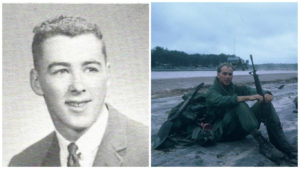 And the man-boys of the Merrill High School Class of 1965 mostly went––draftees or volunteers—into the military. Drenched beneath a Niagara Falls of facts they ‘stepped forward. My male friends of the University of Wisconsin class of 1969, not so much. Some few went to Canada. Most wrangled graduate school placements until the lottery and the Nixon-Kissinger drawdown obviated the moral issue.

My subsequent military career was in reconnaissance and intelligence, a great portion of that time in the business of deception and counter-deception. Our rule of thumb was that deception is most effective when it is at least 90% fact based.The storyteller tells a story. The journalist tells a fact. The storyteller gives you pause to think. The journalist tells you what to think. In the deception business, we learned to control the narrative, to tell the story, picking facts from here and there, like bricks in the building of an edifice. Facts are mutable.

Perfume River is a worthy read, worthier yet when re-read, and yet more so the third time. Read carefully. Each multi-layered sentence speaks to the moment, but also to another moment in the speaker’s past, to a moment in the historical past.There is nothing in Robert Olen Butler’s literary oeuvre to makes one suspect that he does not know exactly what he is doing.

And Robert sees Bob. Half a dozen strides away. Their eyes lock.  Bob stops. They look at each other.
Bob lifts his right hand, moves it up to his chest, and then reaches inside his coat. He pauses. For a moment Robert thinks Bob is feeling his heart. Is he in pain? But Bob’s hand is moving again, emerging.
A pistol, in profile against his chest, moving now, turning, the barrel coming round, …

Robert has no time to think, perseverate, argue, read, seek counsel, weigh emotion with logic. How would the women of the Southland judge Robert, and for that matter, how would Darla?

I mull yet the difference between the liar and the storyteller. Perfume River.  I sense that yet one more read will reward.