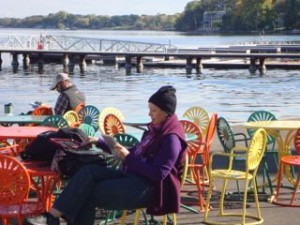 We are leaving Madison.  Tonight we board Turkish Airlines flight 6 for Istanbul, Turkey, thence to Venice for a few days and onto Rovinj, Croatia.

I’ve finished the final edit on my next novel (which Patrice will read on the plane), formatted Serge Kotlar and my translation of Evgenii Belodubrovskii’s  Thirteen Coats and researched a great deal about Post Traumatic Stress Disorder, particularly that work Bessel Van Der Kolk, a Veteran’s Administration psychiatrist, has done post-Vietnam.  I haven’t yet finished translating a particularly good history of  Vladimir-Suzdahl, an ancient Russian town where some scenes from my next novel (working title The Executioner’s Son) take place and a particularly bloody patch in Russia’s bloody, bloody history, but will post the translations when I finish (December this year?) here at Liar’s-Path.com.  Oddly enough, Professor George L. Bailey, who with Lydia Borisovna Kalaida, taught me Russian fifty years ago, donated this particular history text to the UW library.  How ’bout that?

It is fall. It had snowed yesterday. Winter has followed me across the plains from Colorado to this south Wisconsin morning.  I took a long dawn walk  as I practiced Croatian (Pimsleur Language Method. Why, I ask, but why  hadn’t someone shown me  this method fifty years ago?)  It was cold.  The sun broke the eastern horizon as I exited the semi-dawn light of the woods to strike distant south Wisconsin oak and maple grove and the morning exploded into color.  Wisconsin.  I’ve often seen such dawn suns burst  Wisconsin tree lines into cold flame.

We will be in Rovinj, Croatia ten months.  While there,  I want to complete three tasks:

1.  Master Croatian.  Reference Pimsleur method above.  To master a language means to me that I can yak in a Croatian bar in Croatian for an hour as I would yak in the Gleason Bowling Alley for an hour in English. In either case, the vocabulary isn’t an Oxford Unabridged Dictionary sort of thing.

2.  Write the novel The Executioner’s Son.   By this I mean that I will by end of May 2014 have a novel draft adequate to send to Jan Weeks. , my editor.  I think I’ve all the research done

3.  Create a book promotion plan.  I think in five-year-plans.  Plans keep one on task.  Yes, yes, I know General Von Moltke noted that no plan survives first contact with the enemy, however…plan one must.