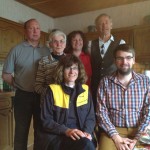 I am a Germanophile. There is not much about this land I do not admire.

(May 2014) Rheinland-Pfalz family friends, I’ve often hoisted those boys into the air. No more.

When I first lived in Germany (Berlin, 1970-75), I was young, inexperienced and busy; my goal was to have a good time. The second time I lived in Germany (Rheinland-Pfalz, 1978-82), married with children, my goals were to be a good father and good soldier. Those struggles no longer constrain me. I have time. My goal is to write good novels.  My novels are concerned with camouflage, concealment and deception (denial and deception); they describe a ‘smoke and mirrors’ world. Truth is conditional.  Great dreams distort, nicht wahr?  So, Fair warning.  This is a self-teaching blog.

This spring and summer in Germany I quietly assess those other times, my own and those of the landscape.  I am writing two more novels (well, writing one and planning one) which are probably more ambitious that what I am capable (sigh).  These blogs are vehicles, smaller than novels, with which I fashion small concepts, and will later somehow use as blocks to the larger edifice.  I imagine my high school friends––Linda, Denise, Jim, Tom, John, Carole and Jack––looking over my shoulder. They are not unkind, but, since they are high schoolers, are abrupt and judgmental, though in the kindest way they know how.

I have no mean skills in the CC&D craft.  I read and study about CAGW a great deal.  One illuminates the other.   I had better explain, eh?

I am in Germany.  It has a long history, which continues. These are a brilliant and well-organized people striving to create beauty, achieve solutions and make great dreams real. Das Deutsche Volk must claim as its own both the blood-drenched murderers and the sublime artists. Von Moltke and Ludendorff and Eichmann claimed their special German-ness, as did Goethe, Schiller, Schubert and Beethoven (One notes the slick PR acumen of the Viennese that can claim Hitler is a German, but Beethoven as Viennese). 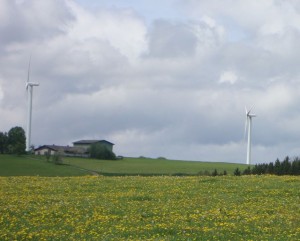 Windmills on a German farm.

In my last post I described the Ehrendenkmalen dotting the German landscape. Nowadays other monuments dot this landscape,  monuments to a great German energy transition, the Energiewende, a massive undertaking and massive gamble, a single toss of the dice, to replace fossil fuels (coal, oil and natural gas) with wind- and sun-sourced energy.

There seem to be solar panels on every roof in town.

The hilltops and rooftops demonstrate the energy  transformation, which is massive, expensive, hopeful and sliding towards disaster.  The cost of energy is brutal.  There are woodpiles everywhere as German households seek relief from the brutal heating and lighting cost.

It brings to my mind at least two other massive 20th century German nation gambles, where everything was played on one toss of the dice, which were WWI and WWII.  Somewhere else and at some other time we military historians can chaw over that single command mistake in August 1914 and in July 1941 which, had it been played differently, would have won it for the German Army.  Both times it was played wrong  and twice the German nation went up in flames.  It’s not looking all that good this time.

The Energiewende at the moment harbors a fundamental flaw. The storage battery does not exist. There is no way to store the surfeit of power produced when the sun shines and the winds blow. The wind and the sun are intermittent; Last January and February, Germany was overcast and still; the windmills did not turn and the solar panels were quiescent. Nuclear and coal for different reasons will not serve as the “battery”; Germany is turning off its nuclear power; The German ‘Greens’ oppose drilling for natural gas (i.e. fracking) which would be the  Energiewende’s natural battery.

The German Energy Transition had not been thought through. It as if I am speaking with one of my teen-agers, police in the foyer, 4:30AM. “What were you thinking!!!?” and hoping, hoping, hoping the damage will not be life-long.

Vladimir Putin, a Mussolini-wannabe (my friend Jeremi Suri’s writes about it here) who had invested his German gas Euros in Russian Special Forces, which are invading the Ukraine while the German Army budget was ravaged to fund the Energiewende, which is collapsing. The Germans now build coal-fired plants while importing coal and wood from North America, watch CO2 emissions shoot through the roof, as the US (because of fracking) is beneficent world “climate change’ good citizen. What’s going on?  (See good discussion of German solar energy plan failure here) (See current high-level German despair over energiewende here) (See same despair in the German language)

Knowledgeable German friends shake their head, much, I imagine, like the prescient among their great-grandparents had after the first battle of the Somme or as had their grandparents after the December 1941 Soviet counter-attack at Moscow. Industrialist tout miracle battery solutions as earlier industrialists had touted the V-2 and the jet fighter aircraft solution, or Ludendorff  touted the 1918 Spring Offensive using the 50 divisions freed up from victory on the Eastern Front. Alas, the Great Battery remains as of yet unavailable.

I am a Germanophile.  I want the Energiewende to succeed,  however foolish was this Great Dream.   I know a great deal about Camouflage, Concealment and Deception. “What were you thinking,” I exclaim?

I have often shaken my own head at how effective CC&D is.  I have been fooled often enough myself.   There is a great deal of camouflage, concealment and deception in Catastrophic Anthropogenic Global Warming.  Clearly, I am skeptical.   Clearly, I understand how invidious CC&D can be and how we can be deceived.  However, it’s tough to explain; my intent is to use one to illuminate the other.  We’ll see how it goes.