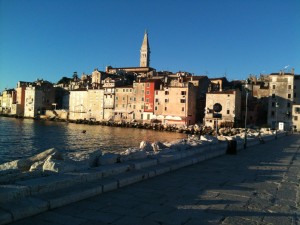 We bused into Rovinj, Croatia, on the Adriatic Sea in a driving rainstorm. We have friends who have a friend who met us, drove us to the old town, and we pulled suitcases up streets with waters cascading down the cobblestoned stairs. We entered the 12th century narrow circular staircase to climb yet three flights, but Patrice married a strong farm boy. Lifted those 20K suitcases like they were grain sacks up into a 350 sq. ft. apartment for €500 a month. Love it.

The Balkans are a different cup of slivovitz.  Mountainous, slashed by ravines and canyons, a landscape reminiscent of our Appalachians populated by peoples, who, if not ‘born fighting,’ learned to survive on the borderland between expansionist Muslims and Christians. Those who didn’t, died. Pacifists?  What is the aphorism? Those who beat their swords into plough shares plow for those who didn’t.  The South Slav and Scots-Irish sides of my family have much in common.

Rovinj is half-half. We live on the Venetian part––the island.  The channel between the ancient BCE-Roman-Venetian-Italian island settlement was filled in a century ago to connect with the Slavic-Croatian-Austro-Hungarian mainland; a walk across the causeway is as light is to dark (I exaggerate ever so slightly, but one can notice the difference).

We live in a 12th century plague house right off the pier at the one remaining gate to the Venetian fortress (the island was the fortress; it’s a small island). We are on the third floor now for the time being. Carpenters are replacing the stairs, and like American craftsmen, are several weeks behind schedule.  We will move up one floor when the stairs are done, which, according to the contractors, will be seven days, which, according to our despairing landlords, will stretch to seven weeks, and which, we suspect, might stretch to seven months. Contractors–– German, Russian, Croatian, American­––take the same course’ Excuses 101. Pope Leo V (?) had the same problem with the Italian contractor he hired to paint the Sistine Chapel ceiling.

I see lots of my Uncle Ed’s and Aunt Helene’s walking the streets dressed and stressed similarly as in those immediate pre- and post-WWII family pictures. Going into a bar in Rovinj is like entering The Slovenski Dom in Chisholm, MN, save that here I speak Serbo-Croatian––haltingly, but I speak it.  I have the numbers down pat, can compose sentences, but pick up only fragments of their answers. Soon, however, I will yak with the best of’em.

It has been slow going getting the lay of the land––telephone, wi-fi access, favorite coffee houses, stores, bakeries, bars, plus getting lost wandering the medieval streets.  The rugged Adriatic is beautiful and this town has its share of scenes that pause one in mid-step; I am here however to finish The Executioner’s Son and finish I will.  May 2014.