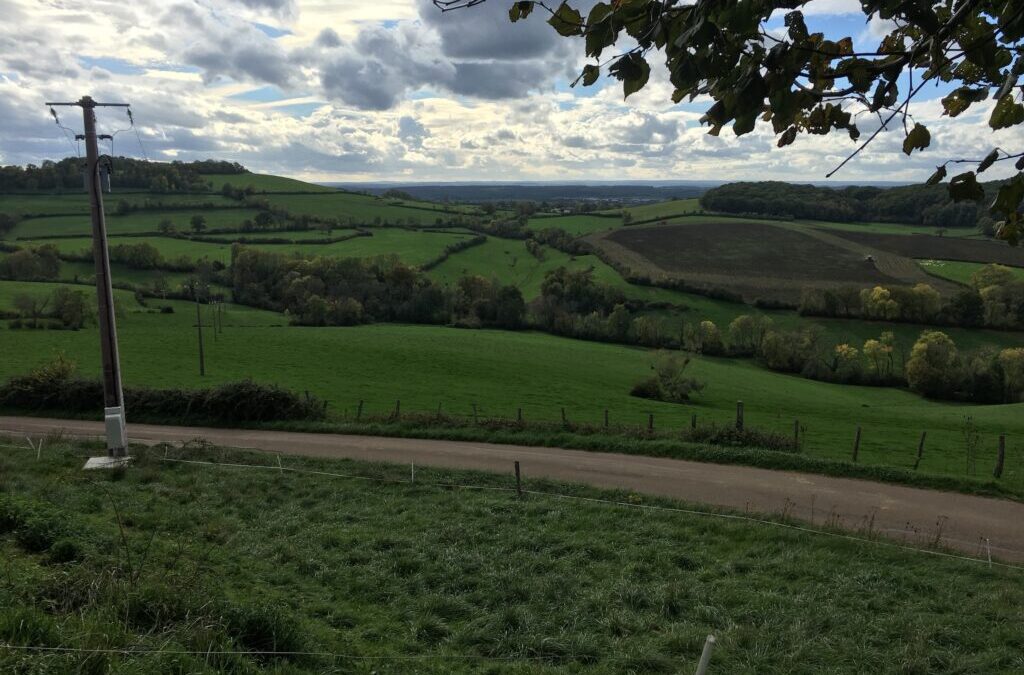 My part of Burgundy (Côte-d’Or)  is a  landscape of ‘manicured’ rolling hills. The French farmers are meticulous, the crop rows straight ( three harvests a season),  the  hillsides dotted with white (charolais) cattle, occasionally a  sheepfold. Burgundy has been farmed by damn-good farmers for 2000+ years.

Northern Wisconsin had been farmed about 100 years and is  progressively returning  to the  wild. Family/friends have sent fall photos:  the leaves vary from colorful to just jaw-dropping, awe-inspiring, making-you-stop-and-lose-consciousness, Pantone’s Book of Colors colorful. Northern Wisconsin can be like that – hypnotizingly beautiful. I once sat in a camouflaged deer stand at sunset, an eight-pointer squared under the 10-yard pin on my compound bow, a northern harrier passing me by at eye level.  I did not shoot. It would have disturbed the moment.

So, Novels.   I am writing one and reading two.

I am reading Vasily Grossman’s ‘Life and Fate’ [Жизнь и Судьба]. Grossman, was a WWII Red Star war correspondent (Red Star was the Soviet equivalent of  Stars and Stripes). Grossman creates with a cast of many a 900-page sweep of the Eastern Front 1941-45. Slavs  at war with themselves and with Germany– never a pretty sight.  The Germans had visited WWI and WWII plus Communism (Karl Marx)  and Fascism (Adolf Hitler) upon the Slavs. The deaths were in the multiples of millions. Vasily Grossman (a Jew born in Ukraine) describes  the Eastern Front as well as any man.

I have just finished  Robert Olen Butler’s latest but-as-yet- unpublished  novel, Twice Around a Marriage,  Two twice-married (to each other)  septuagenarian literaturs  and academics––the wife a writer and the husband a literary critic––are Covid-confined in Paris where they had met as students, where they now gnaw upon one another and upon their marriage.  They gnaw with the tools they have,  stories  true as memory allows.  The premise of the novel is ridiculous; ROB’s treatment is sublime. I consider it a  2nd Pulitzer Prize material (after his Pulitzer Prize winning  novel Good Scent from a Strange Mountain). )

Me? And I am thrashing through last 3-5000 (10-15,000?) words of my novel Resurrection. This is the fifth of five novels which narrate the journey of two Northwoods kids through America’s late twentieth century wars.

The ‘final draft’ of this the fifth and final novel in the series is misery-making.  One weaves together the threads of multiple storylines–– the incident on page 37 on the farm road in Upper Peninsula, Michigan must agree with outdoor cafe scene three-years later set on the Una River, Bihac, Bosnia-Herzegovina, pg 257.  ROB has written a literary gem with two people in one apartment in Paris over the course of a week. Vasily Grossman’s eighteen or so main characters traverse WWII’s Eastern Front over several years. Both novels are perfections in their genre. Below is an opening scene at my attempt a literary perfection.