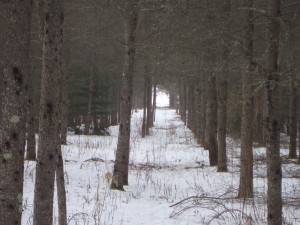 At below zero, tamarack limbs turn brittle, easy to break off. This winter I’ve built paths in the groves. 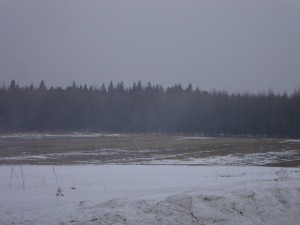 The snow this winter, three feet deep in parts of the tamarack plantation protected from wind, has melted to slush and water.  I had cut trails (Tamarack branches are brittle at below zero and can be knocked off with a steel pipe; other evergreens have to be sawn).

I had discovered snowshoes this winter. My leg muscles recalled crossing these swamps one-half century ago, snow waist high, pulling a leg out only to plunge deep the next step, the boots filling with snow. Snowshoes. Wonderful. I’ve used cross-country skis for years, though this year high winds and heavy snows erased in hours strenuously broken trails.  Now, in this morning’s dawn light, I see the snow remains only along the southern edge tree lines. 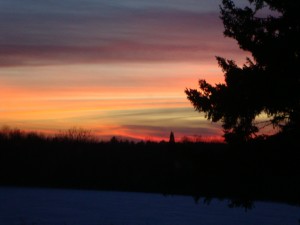 I have yet to hear partridge drumming (though strutting cocks along Deer Shiners Dr have been showing their stuff to fairly indifferent hens) nor the great horned owl nor seen Canada geese or sandhill cranes, but they’ll be by soon. Lot of bobcat track in the mud; Lincoln County trail cameras show the occasional cougar and once this winter I came across a wolf track in the deer yard east of the farm house.