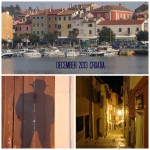 Harbor, Cathedral and street in the medieval city

Days this side of the Adriatic tend to be cool, but sun-drenched.  I understand  that Venice, directly west across the sea, is cloud-covered and rainy Nov-April.  Adriatic storms flood Rovinj’s main square now and then, but for the most part it is beautiful and charming and it seems as if it has been so forever.

It is of course not so. Croatia and Serbia is the region where the Western Roman Empire divided from the Byzantium, which fell to the Seljuk Turks, on one side Catholic, on the other Orthodox and into that misunderstanding, Islam.

The Balkans are mountainous, its terrain riven with obstacles (think West Virginia) that divide peoples, obstruct  commerce and commends itself to defensive fortification. The Istrian Peninsula, a region the size of Maryland and a small corner of the Balkans is dotted with the ruins of hilltop neolithic fortresses, some 320 so far.  If this geography meant nothing else–though it meant much else––it meant grinding poverty and religious, state and civil wars, which sent generations of Croats-Slovenians-Bosnians-Serbs to Chicago and Joliet, Illinois, and Chisholm, MN and Cleveland, Ohio, as well South and North America and Australia.  In 1905, when my grandparents migrated to America, working in a steel mill at $8.00 and living in a slum rooming house at 50₵ a week represented unimagined wealth and security.

We have befriended an Australian brother and sister, whose parents emigrated when the Italians were driven from the Istria Peninsula Post-WWII during the Yugoslav settling of accounts. It is a euphemism for the Red Terror, two years when Tito, then a run-of-the-mill Stalinist, unleashed one group of people to murder the other, Communist SOP when coming to power in the twentieth century. When the various populations were sufficiently cowed, he bade them stop.   The winners then erected monuments: Here Benino Fratellina, Partizan and Hero, was executed by the Fascists.

In 1992, Tito died, and the people’s war, ended on command in 1946, recommenced. When we left Boulder, Colorado, we sold our car to a Bosnian Muslim couple. The husband had spent two years in a concentration camp.   Resentment simmers. The Croats would be well advised the join NATO.  Given that, this winter Croatia on the Istria Peninsula could not be more pleasant.

The Coffee houses play a serious social role, the time of the day and the fall of sunlight influencing patterns of occupancy.  When I take my 0600 walk (listening to Croatian language tapes) hard-core working men, construction workers or fishermen, sit in the dark over espresso, their presence indicated by the glow of a cigarette.  As the sun rises over the square, the customers change.  Old women with friends, younger women with children, retired gentlemen and businessmen, and of course, we tourists, take over the chairs.  We fill the tables progressively as the sun advances.

The  children run somewhat free.  No doubt Croatian mothers can be as neurotic as America’s helicopter’ mothers, as Chinese families raising their ‘little emperors’, but it’s not so apparent on so much on Marshall Tito Square.  Cars, scooters, pigeons, dog and seagulls crisscross and kids are told ‘go entertain yourself’ while mom talks intently with a neighbor whom she hadn’t seen in at least two days.  These less-than-teen-age children figure it out. It is familiar to me. I come from these people.  My parents likewise sent us to ‘go entertain yourselves’ when we went to Ratzburg’s Bar in Gleason in the 1950s.

Writing novels remains difficult, hard, brain-breaking.   I have finished Wounded, the second novel in the Liar’s Path series, which ends with our young hero in Vietnam circa 1964, a US Army soldier and sniper.  On a patrol into Laos west of Kontum, Vietnam, he sees a white man accompanying a NVA patrol, is ordered to shoot him, and he does.  The task remaining is to format the novel for publication.

Which introduces the third novel. The white man Rick Belisle shoots is Danton Borisovich Larionov.  This novel, tentatively titled “The Executioner’s Son” tells Larionov’s story. And Ricky does not mortally Danton for they face off again in a forth novel, working title Broken Codes, which is more or less already written.  My goal is to make the stretch of their interconnected story coherent, Tolstoyan in length, around 250K words. We will leave for the summer in Germany on 15 April 2014.  I will have finished the  first draft of Executioner by then.

Michelle came to spend two weeks in Rovinj for a rest cure.  We took the bus to Zagreb to pick up Michelle, and Zagreb, beautiful as I imagine it could be, was hectic to our taste and we scurried back to our quiet Adriatic port.  A heavy fog in Zagreb, a sophisticated city with hairdressers with sophisticated skills.  Zagreb according to inter-war B&W photos had a sense of style, and continues so. Our Rovinj in winter is backwater, like any Wisconsin resort town, and we are thus very happy here.

We brought Michelle back to Rovinj on the first evening of festivities; in this case a Christmas music concert on the square by a choir we thought particularly good for a simple church choir.  Post-concert one of the men joined us and explained that, no, they had just won a silver medal at the Krakow festival.

We  attended a concert of liturgical and Christmas music at one of the six Rovinj churches.  First, the choirs were astoundingly good, within the 14th century cathedral the sound approached ethereal, and when on young woman soloed “O Holy Night’ solo, in English, without accent, I nearly wept. I regret I didn’t record her solo, particularly that moment when the applause swept over here, she seemed non-plussed.  ‘For me?’