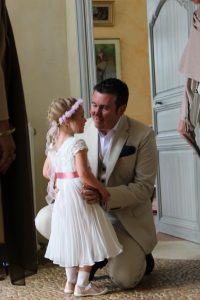 And Michelle married Nigel Howard, formerly British Army, Royal Engineers (Explosive Ordnance Disposal (EOD)). Think the movie Hurt Locker, the difference being the British Army does not provide metal full body armor (makes the lads pay attention, eh?). During the Invasion of Iraq Mr 19, 2003, Nigel’s unit, 49 EOD Squadron, Royal Engineers Corp was attached to Task Force TAWARA 1st Marine Expeditionary under Brigadier General Rutowski.  In 2003-4 he was attached to Task Force Black clearing mines in Iraq, leaving the the military in April 2005. Subsequently he worked with the company Mine Awareness Trust in mine clearing with the Counter-LRA (Lord’s Resistance Army) task force, based in Uganda but also operating in South Sudan, Rwanda, Congo and Kenya.

What recommends Nigel to the family besides his warrior ethic, innate hospitality, and providing his father-in-law single malt scotch is: 1) his gift of gab and 2) an family as extended as our own.

Nigel’s mother, Kirstien,  born and raised a small mining village, Blaydon Burn, located just outside of Newcastle-upon-Tyne in Northumbria (slang sobriquet ‘Geordie’)] ( a region south of Hadrian’s Wall)  from whence (as far as I can tell) the Townsends of Georgia and northern Florida also emigrated. Thus our cousinhood.  The first Townsend emigrated as part of the great Scotch-Irish⁠1 migration (1717-1775).  It is thus no great stretch to equate Geordie = redneck = Scots-Irish. 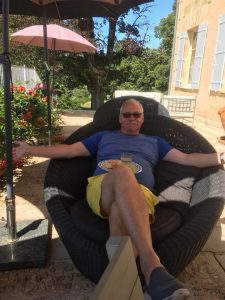 Jon Howard (RAF SIGINT) and I (USAF SIGINT) had near-overlapping long tours in Berlin and NATO headquarters Ramstein AB. (Every July 4th the RAF Gatow blokes would call us USAF Marienfelde blokes to congratulate themselves for ‘good riddance.’)

Michelle and Nigel now commute England ⇔ United Arab Emirates, their Dubai apartment a crossroads to British and American soldiers/contractors going to or leaving wars in the Middle East and Africa. 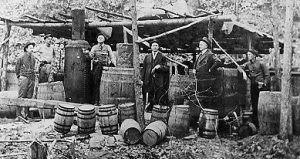 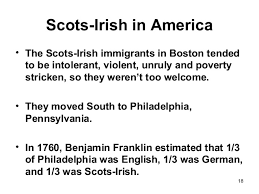 Early in the summer of 1717, the Quaker Merchants of Philadelphia observed that immigrant ships were arriving in more than their usual numbers. By September, as the first scent of autumn was in the air, the Delaware River was crowded with vessels. The came not only from London and Bristol, but from Liverpool and Belfast, and small northern outports with strange-sounding dames––Londonderry and Carrickfergus in Northern Ireland, Kirkcudbright and Wigtown in Scotland, Whitehaven and Morecambe on the Northern border of England. In October the same year a Philadelphia Quaker named Jonathan Dickinson complained that the streets of his city were teeming with “swarms of people… strangers to our Laws and Customs, and even to our language” The men were tall and lean, with hard, weather-beaten faces. They wore felt hats, loose sackcloth shirts close-belted at the waist, baggy trousers, thick yarn stockings and wooden shoes “shot like a horse’s feet with iron.”  The young women startled Quaker Philadelphia by the sensuous appearance of their full bodices, tight waists, bare legs and skirts as scandalously short as an English undershirt. page 605-60