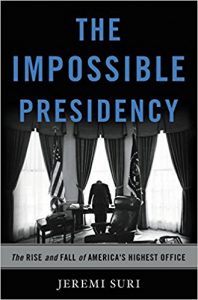 The Impossible President thesis is that current responsibilities and expectations of the office of the President of the United States are beyond the capabilities of any human being to manage. Failure and disappointment, for the man and the fan, is inevitable.

The book should be bulk purchased as required reading to newly arrived congressional and military staff in Washington, D.C. Skip the veterans (more than one month in town). They are too busy to think.

Full disclosure: I audited two of Professor Suri’s University of Wisconsin history classes several years ago and consider him one of the five finest teachers I have encountered in some sixty-five years of student-hood. He is unafraid to be challenged. Substitute ‘hypothesis’ for ‘theory’, and he would endorse physicist Richard Feynman’s statement that “It does not matter how beautiful your theory is, it does not matter how smart you are. If it doesn’t agree with experiment, it’s wrong.”  He’s a good boy (He’s thirty years my junior).

In Washington, D.C., busyness, like malaria, infects all, though not everyone dies. The infected, however, are grievously worn. Perhaps, the constant traffic jams on the beltline and I-94 both north and south induce brain fever, once a peculiarity of the Dostoevskian novel. I served in D.C. 1982-89. Officers who had served in the 1960s and 70s described how ambulances 2-3 times a week hauled sedentary lieutenant colonels out of the Pentagon to the morgue. In the Washington, D.C. I knew, one cultivated (simulated, if necessary) busyness to be competitive for promotion. Hysteria ruled. One could not avoid, but could (try to) dissipate the tension.   We jogged to stay alive. (Busy, busy, n’est-ce pas?)

I had thought that at least the president had time to think.

Not so. Professor Suri inserts President Lyndon B. Johnson’s March 11, 1965[i] daily diary (pp.213-218) into his book. Four pages, his day scheduled morning to night, in fifteen minute increments. It made my blood run cold. This was how one lived there (By way of contrast, on the day after Pearl Harbor, President Roosevelt’s daily diary contained two items).

Jeremi Suri has in fact written two books, which I name Book I (Chapters 1-7) and Book II (chapters 8-9).

Book I of The Impossible Presidency is structured like a military (Air Force, at least) staff study. See (USAF Pen & Quill. Chapter 17), Generals Marshall and Eisenhower would have been familiar (and had young Jeremi on the promotion fast track; though The Impossible Presidency would have been returned to be reduced to two pages (plus attachments)).

In Book  II, Jeremi Suri becomes a commentator on current events––the Reagan-Clinton-Obama-Trump presidencies––where the “facts” are incomplete, the documents secret, conclusions tentative, where speculations abound and events have yet to play out. History has yet to unwinds!

Were The Impossible Presidency as staff study, it would perhaps display thus:

Statement of the Problem: The responsibilities and expectations of the office of the President of the United States is beyond the capabilities of any human being (much less the dysfunctionals willing to campaign most of their adult lives for the office).

Background: Book I traces how particular presidents––Washington, Jackson, Lincoln, Theodor Roosevelt, F.D. Roosevelt––were change agents, growing both the responsibilities and expectations of the office. The thesis is simple, the evidence is apt,, the conclusion clear. Historical facts are facts (more or less), events have played out (The North won the Civil War; the United States won WWII, the Soviet Union is no more), these presidents, history has judged, were more often right than wrong.

Proposed Action: Alas, we who have written bunches of staff studies understand it is a tool which like the war plan[ii] is supposed to manage the future. Book I, more fact than speculation, transitions to Book II, more speculation than fact.

The historian turned analyst is of necessity bedeviled by that which bedevils the run-of the-mill intelligence analyst: States guard their secrets; States lie; Cunning devils from Sun Tszu to Kahneman & Tversky understand how men reason, and manufacture false facts to deceive them. I would read with anticipation Professor Suri’s The Impossible Presidency Revisited to be published in twenty years.  Many of the hypotheses in Chapters 8-9 will require a revisit.  For example:

On page 285, Professor Suri posits the hypothesis that “Russian President Vladimir Putin went a step beyond where Soviet leaders had feared to tread, intervening directly in an American election to support a candidate (Donald Trump) strangely susceptible to the Russian Leader’s influence. Marrying Traditional KGB tactics to cyber-warfare and social media savvy, Putin helped to create a Manchurian Candidate bent on weakening American power from within.”

Strong statement, indeed, which I dispute.  I hypothesize that Russian active measures are merely (devilish though they may be) traditional, the extraordinary, even hysterical, US public response is exceptional.

Further full disclosure.   From 1982-1989, I was the Air Force Intelligence Service Special Studies Division executive officer. My division broke enemy, primarily Soviet, deceptions. I have at hand books, papers and memory from a half-lifetime studying, countering, explaining Soviet and Russian denial, deception, and disinformation. There is a great deal of material. The Soviet Union through its duration funded an extensive organizational and intellectual array to know, manipulate and control the political process in countries za granitsy, ‘beyond the border.’ In our facilities at the Central Intelligence Agency’s National Photo Interpretation Center our team studied, disentangled and reported Soviet current and historical denial, deception and disinformation measures.

I highlight two of many:

Venona Project:  Soviet activities documented under the rubric The Venona Project reverberates still through American public discourse.  Before, during and after WWII, the Soviet Union seeded hundreds of agents and agents of influence throughout the US Government. US intelligence post-WWII broke the NKVD agent code system, called The Venona Project[iii], uncovering 349 named Americans working for the Soviets with Soviet NKVD personnel referencing several hundred more unnamed agents.  The Venona revelations are known only to specialists: all know Wisconsin Senator Joseph McCarthy, to whom the results of the Venona  code breaking had apparently been leaked.

Soviet participation in US defense debate (1959-1982): Through the use of a formal deception program directed from the highest Soviet echelons, the Soviet State participated mightily, if covertly, in the US defense debate in the period 1959 to the mid-1980s. The Soviet leadership sought to guide the US defense debate in directions conducive to Soviet security. For twenty of those thirty years, the Soviet strategic deception program enjoyed success.   But by the mid- 1970s, at the very pinnacle of its achievements, the deception plan unraveled. With President Reagan’s inauguration in 1980, enough of this program had been uncovered to call into question U.S. assumptions and put at disadvantage those who argued a benign interpretation of Soviet military objectives. When President Reagan submitted his first Defense budget, which called for a significant increase in defense appropriations, opposition was muted. Soviet adventurism in Ethiopia, Angola and Afghanistan was responsible in part, but to a significant extent, Soviet strategic arms deceptions, recently uncovered, called into question the very validity of US intelligence estimates. The worst now seemed possible.   The Soviet Union may have had neither intention nor desire to initiate war with the United States; however their widespread use of deception undercut that assiduously cultivated perception. .[iv]

Click this photo to access a pdf compendium, 384 or so pages, of Soviet active measures in one mere decade.

In contrast to President Obama’s agonizing over whether to call out Mr. Putin in the run-up to the 2016 vote, the US Department of State in the 1980s routinely published compendiums of Russian “active measures.”   US Intelligence continues to follow Russian Federation active measures (if you have two hours, CSPAN presentation here. Routine Russian meddling in US internal politics occasionally occasions hysteria.

Professor Suri departs the firm(er) ground of the classical historian onto the quaking bog of the intelligence analyst. He is will to posit hypotheses that will eventually judged courageous, or hubris.[v]___Not safe. Ask George WH Bush about the ‘slam dunk’ Iraq WMD assessment. I applaud this young (er) historian.

[i] Operation Market Time, the U.S. Navy complement to the aerial bombing in Operation Rolling Thunder, began off of the coast of North and South Vietnam.

[v] Several years ago, recently retired, I gave a lecture at a local synagogue describing the 1973 Egyptian-Syrian deception plan, which permitted the Arab armies to attack Israel without warning, the Yom Kippur war. The lecturer (me), the audience, and the Egyptian-Syrian deception operation were all quite sophisticated. “Hubris!” the accusation my audience hurled at Golda Meier and Moshe Dayan. “Lighten up,” I responded. “Anwar Sadat understood what the Israeli leadership wanted to hear, and provided ‘facts’ to support their (false) conclusions”  My audience wouldn’t hear of it. “Third temple,” a old gentleman muttered. I am Gentile. I afterwards had to look the implication of the reference up.