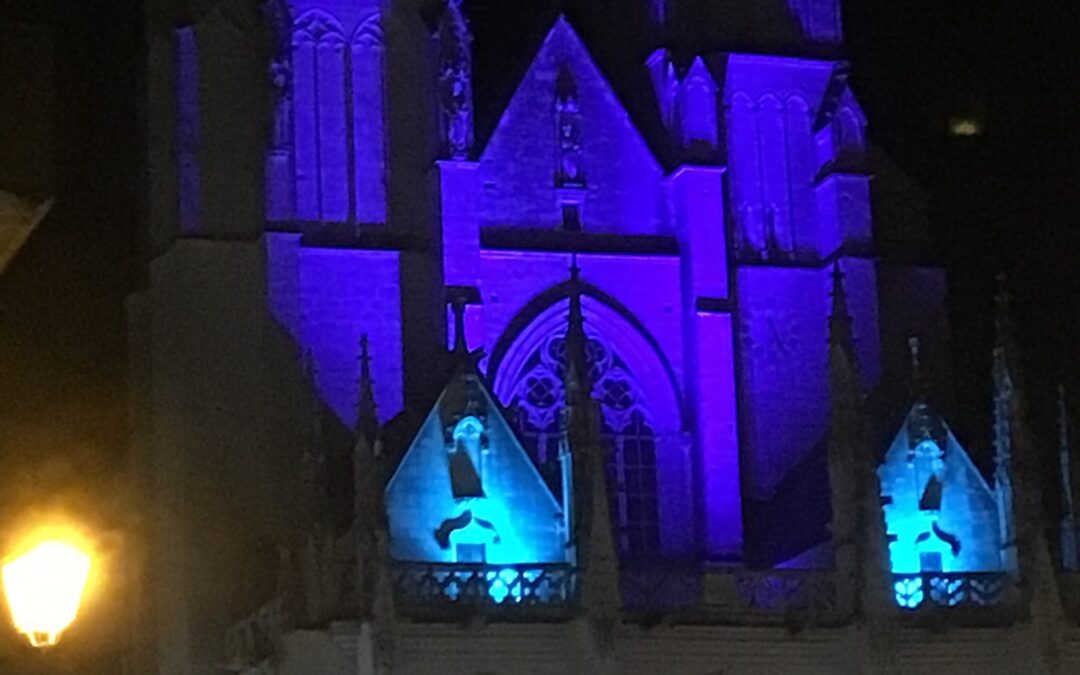 The weather in France has turned cold, between 30-34F.  I hear guffaws all the way from Northern Wisconsin. A blizzard sweeps across the northern plains and into the Northwoods as I type.  Today is an anniversary of sorts. Patrice and I arrived in Semur-en-Auxios, France three Christmases ago today, and now begin our 4th year.

Semur-en-Auxios, perched on red granite rock and surrounded on three sides by steep ravines, has long been a fortress, was first mentioned in documents around 466AD. The area surrounding contain neolithic megaliths (picture). Nearby is Alesia [about eight miles from the apartment as the crow flies] where in 59BC Julius Caesar besieged and defeated the Gaelic chieftain, Vercingetorix,  The battle at Alesia, Where Gaul died and France was born, as the French like to say.

We are in Calais, `where tomorrow we’ll meet awaiting Michelle and Nigel to travel to the Christmas Market in Bruges, Belgium (Link), then onto Horsmonden, England, for the holidays. So, on the eve of my fourth year in France, how do I occupy myself?

Our lives have taken on a regularity. I awake at 6AM, make my cafe creme, read the news,  take computer and novel  Resurrection to Brasserie Mont Drejet.

Then I write 2-3 hours. The novel is nearly complete, I hope. If I may whine a very little bit. It is so  …’’’’haaaard’’’…. to weave multiple story lines into some sort of satisfactory ending.

I talk with my buddy, Robert Olen Butler,  in Florida about once a week. We allow one another a five-minutes bitching each, then go on to narrate our lives.

ROB has just finished  his 25th novel/book, Twice Around A Marriage, and in celebration, he and Clara flew to London to do the ‘West End”.

ROB gave me this guidance some 50-years-ago and it still works.

Sit down before a blank sheet, go to that quiet space in your head, and jot down the first thought––incomplete, unconnected, an idea of a scene, perhaps irrelevant––in an incomplete sentence.  Now, write another, then one more. Five half-sentences is a good day’s work.  Next day, do the same. Then the next day.  Fifteen-twenty scenes?  Go to it.

Then I (try to, really try…) study French for an hour. I’ve learned a couple languages in this lifetime and this I know.  One listens, reads, repeats the language for awhile, and then one day you are comfortable.  Another year, and I will be yakking in French as I know yak in German and Russian (but no one mistakes me for a native, rest assured).