On the Edge of Things 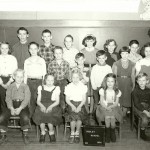 To grow up in the northwoods was to grow up on the edge of things. On Mother’s day, Highway 17 filled with cars heading north past patches of dirty snow that remained still in the shaded ditches. On Memorial day the flow reversed, the trees growing bare, the winds grown cold, nights long, human warmth and light retreating to a single room in a single house within a forest that seemed to stretch without break to the tundra. This was a near truth. In the 1950s there were three East-West highways between the farm and the Arctic––Highways 8 and 2, and the Trans-Canada.

At Dudley Graded School, the  Christmas program marked the end of the rural year.  Beginning the first week of December, little schoolwork was done. Religious songs framed the program, secular carols interspersed the plays.  Santa Claus was the finale, arriving to pass out bags of nuts and fruit.

A Christmas program was not a simple production. The program had to move, provide light and flash, plus last no longer than one hour, to satisfy two separate and distinct audiences.  One set of critics––pre-schoolers, ages four to six, with the attention span of October snowflakes––sat before the stage. A show five minutes too long encouraged misbehavior.   The parents expected a well executed one-hour show. If the performance was ragged and if the little ones revolted, the teacher’s contract might not be renewed.

The forest has reclaimed Dudley, the crossroads mill town where we grew up. Of the dance hall, post office, store, lumber mill and hotel, there remain only foundation stones amidst gnarled lilac bushes. The patch of white pines just upstream on the Prairie River has returned to old growth.  I measured them in December while smoking a quiet cigar—some are over 110′ high. 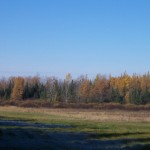 The forests seemed magical. My sister tells of watching me enter the woods, rifle slung over my shoulder, as if I were entering an enchanted forest, as if walking through an impenetrable wall, which allowed passage to the few and where different laws and perspectives pertained. To return whole meant one had different gifts with different understandings.  The forest no longer imprisoned.

It is a grey overcast day towards evening.  I am eight-years old.  I have been sent to fetch the cows.  I cross a stretch of wood and the forest envelops me. Tag alder, spruce and cedar hide the sky; swamp muck sucks at my boots.  I am lost, frightened, terror closing my throat to the scream.  A bell tolls. A cow appears in the mist, then the herd, and their trails now as clear and certain as Highway 51 south to Wausau.

Emptiness was there, not far, at the edge of the forest.