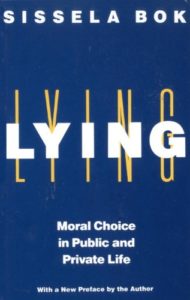 Lying: Moral Choice in Public and Private Life (Sissela Bok) deeply informs  Liars and Storytellers. I have carried a copy in backpack and briefcase for decades,  reading it cursorily now and then, edition after edition disintegrating from disuse,  always children, war, the morning office crisis, marriage, birth, death, and yes, parties, Rugby, hunting, ever the this-and-that which makes up our day-month-year life taking priority. Sissela Bok, I suppose, requires a university course––the semester final exam, like execution, focuses your attention.

My long purpose in the project Liars and Storytellers is ‘working truth’. I write stories.  I broke deceptions. I advised deception planners. I received honors (plus generous pay)  to discern truths screened behind lie, deceit, camouflage, denial, concealment, partial truths, deception, and on and on.  The lie, like truth and like beauty, being in the eye of the beholder, mascara, corset, camouflage netting, pattern painting, lipstick, click jammer, smoke, mirror, and cloth manipulate our perceptions.

Bok defines a lie as ‘any intentionally deceptive message and,” viewing it as part of the larger category of deception that includes all that we do or do not do, say or do not say, with the intention of misleading others.⁠1

She cautions, as do I, that “There is a large category of statements where deceit is not intended but where truthful communications is far from being achieved. In considering this category, it is important to take into account all that help to distort communication quite apart from an intention to deceive.”⁠2 (Pg xxi)

The American Heritage Dictionary defines the lie both broadly and narrowly and delimit the outer boundaries of the lie: “1. A false statement or piece of information deliberately presented as being true; a falsehood. 2.  Anything meant to deceive or give a false impression.”  In between the two characterizations lies the entire domain of deception.

She further cautions that⁠3 “Any number of appearances and words can mislead us, but only a fraction of them are intended to do so.”⁠4

I once gave a lecture at a Jewish community center on the Syrian-Egyptian deception operation leading up to the 1973 Yom Kippur war whereby the well-conceived and -executed deception plan caused a near-fatal delay in the Israeli response; I.e., the Israeli Defense Force suffered a surprise attack.

Though my lecture was twenty-five years post-war, the audience responded as if the attack had happened the previous morning.   “Hubris,” they retorted in unison.  ‘Golda and that Moshe (I was charmed that the elderly audience spoke of the Prime Minister and the Defense Minister of Israel by their first names) fooled themselves!’ I reaffirmed my point but changed no opinion.  We’ll address this  topic—using  a target’s preconceptions to the deceiver’s advantage–in a later blog.

Sissela Bok’s Lying is a textbook and extended essay on the advantages and disadvantages of the lie, which, along with Frankfurt essays On Truth and On Bullshit, are touchstones to this project. I will return to them again and again.

As I thought about the many opportunities for deception and about the absence of a real debate n the subject, I came to associate these with the striking recent decline in public confidence not only in the American government, but in lawyers, bankers, businessmen and doctors.  In 1960, many Americans were genuinely astonished to learn that President Eisenhower had lied when asked about the U-2 incident, in which an American spy plane and pilot had been forced down in the Soviet Union. But only fifteen years later, battered by revelations about Vietnam and Watergate, 69 percent of the respondents to a national poll agreed that ‘over the last ten years, this country’s leaders have consistently lied to the people.⁠5

It continues. See  here.  I will not comment on the 2016 American presidential campaign, which will provide historians the case study on political lying and bullshitting, but will examine the Soviet Union Glasnost’ and Perestroika campaigns and the problems associated ith the unraveling of a deception operation.  More to follow.

3 She suggests many.  1. Confabulation: Now used to refer to the stories told by brain-damaged persons suffering from Alzheimer’s Disease and a variety of other psychiatric and neurological conditions (pg xxi)

2. A second concept is that of pathological or compulsive lying. Pg xxii

3. A third concept, ‘duping delight,” sheds needed light on a range of pleasurable motives for deceit.  It evokes the excitement, allure, challenge that lying can involve.

4. A fourth concept helps counter simplistic reason about truthfulness and lying: it is that of ‘truth-dumping.” Coined by psychiatrist Will Gaylin, it conveys the harm that brutal, needless, or uncaring truth-telling wan wreak.  Parents who bombard their children with criticisms, spouses who gloomily dwell on each other’s dreariest traits, curt help professional who shock unprepared patients with grim news—all may be telling the truth even as they violate fundamental standards of respect and concern. (Pg xxii)