I am a hard case for the homilists of Holy Wisdom, the Benedictine Monastery, Madison, Wisconsin, where I attend mass. I tend to zone out. However, the first reading during last week’s mass, Numbers 27:1-11. caught my attention. Here, before Moses, the daughters of Zelophehad, claimed certain God-given rights independent of their place as property of their men, rights which Moses acknowledged (the first Western text (that I know) )  as God-given, the right to an (quasi-) existence (somewhat) independent of her man.  The  women were even named (Mahlah, Noah, and Hoglah, and Milcah, and Tirza), and the text remains in the main Abrahamic (Judaism, Christianity and Islam) religious texts to be examined, discussed, evaluated (and ignored), given as evidence. (Unfortunately, in a backroom deal, the Israeli elders circumscribed these rights, but still the rights remain God-given. Political machination does not negate original intent, eh?)

The reading randomly brought to mind a 1960s Virginia Slims cigarette advertisement. ‘You’ve come a long ways, baby!’.  And then it brings to mind the infamous Harvey Weinstein (if the name is unfamiliar to you,..I don’t know what to suggest.)  Foul-breathed dragons roam the earth.

I have daughters, who were once children, who have grown to be women, charming, accomplished, kind, and tough. There exist predators and louts (Many. See California)  One raises, protects, educates, worries, but in the end your young women leave home. Had I taught them to defend themselves, to discern the lout from the predator (both sexes, mes Amies, lions and lionesses), given them strategies to deflect both? 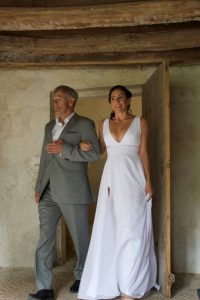 Some weeks ago, I attended my youngest daughter’s wedding in France. My function was Pater families, my single responsibility was look good (Successful there, thank you). All my children came, many grandchildren, and a passel of cousins. You look at them and wonder “when did they become such beauties.”

Michelle’s maid of honor, Dima,  a Lebanese beauty, kind and gentle, a fearless and fierce London lawyer, born of an Arab culture that relegates the married woman to the nursery and kitchen.  read as her maid of honor speech from a letter1   I had written to a Middle Eastern boyfriend of Michelle, who wanted me as a ‘father’ to talk sense to Michelle. She needed to know her place.

Now, be it known this attitude is not exclusive to Arabie. At our family table, my father would often pronounce that a woman’s role was homemaker, her place was in the house, etc.   Reality was that my mother worked in the barn, in the fields and as a waitress to supplement his sporadic and paltry income. Around this table sat six sisters who put up hay, milked cows, delivered calves, and cooked, cleaned and slaughtered chickens while earning their assorted Phd’s, JD’s, MFA’s. He didn’t get away with it, nor did I.  Sisters, girlfriends and daughters excoriated my own ‘false thoughts’ (as Communists were wont to accuse), burning them up like dried grasses in the Spring.

I don’t pronounce to my children. Had I only sons, perhaps, I would have, raise one finger to expound how to properly conduct oneself. My sons would listen, more or less, then ignore me.  The daughters would hear my instructions, then do the opposite. they taught that if I wished to instruct, my words had to be indirect, almost Delphic.

And I really don’t want to hear their battles, won or lost, against the foul-breathed dragons.  I didn’t tell my parents my gory details (See Anne LaMott’s wondrous Traveling Mercies for details no parent wants to hear); what could they do?  Perhaps, the bottom line is when you like your kids, it helps.  Below, a father’s letter to a doofus.

I appreciate your letter of concern.  Michelle is coming to the United States soon for a family reunion and we shall certainly talk to her about healthy choices, friends who drink too much and too many late nights. Of course, Michelle is no longer a child, but an adult and sophisticated businesswoman, who has accomplished a great deal in her life, and will accomplish a great deal more.

I am sorry you felt you had to treat Michelle as a child, and wish you luck in growing out of this misunderstanding about the worth of women.  A generation ago, Americans also infantalized women, and our country was much the poorer for it.  As you know Michelle’s sister, Marcia, is an Air Force general, her  sister, Deborah, is the Chief Financial Officer of a trucking company, while 43% of the US military is now female (including some ten percent of its combat pilots).  That certain women might be difficult to deal with (as are certain men) is a truth; To waste the brain power of 50% of a country’s population renders that country much the poorer; to treat women as children is…how to say..a great foolishness.