Tomorrow, the Rocky Mountains eastern slope and the Boulder, Colorado, Flatirons, disappears.  I am glancing over my task list, which in the nature of task lists, is endless; however, there are strike-thru’s up there at the top.  Patrice has been teaching; I have been writing, though this last week, not so much.  I know when I have not been writing because I have technicolor 3-D dreams, as if I am watching Sandra Bullock in Gravity. 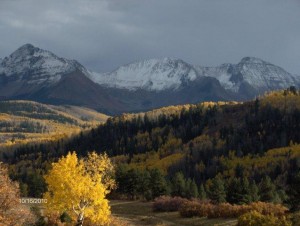 I’ve finished the second novel (Wounded…I need a better title) in The Long War series.   Oh, I still have to write the forward, make thirty or so point of view corrections, then format the manuscripts, get Patrice to design the cover and write the blurbs, …but the story is done.  Ricky Belisle and M.J. Charbonneau spend the late summer and fall 1962 in a landscape such as this (view from my friend’s mountain cabin porch, where I had written the first draft of Wounded).

Serge Kotlar and I have finished the Russian > English translation of Evgenii Belodubrovskii’s Thirteen Coats, A Meditation on St. Petersburg. Done, formatted, and ready for publication, save Patrice has yet to finish the design of the book cover.

Thirteen Coats is a  meditation on Leningrad, Russia, from his birth in 1941 on the eve of the German invasion, surviving (his father and grandfather died of starvation) the  three-year blockade,  a childhood in Stalin’s Russia (children are exuberant most anywhere), youth and adulthood in present St. Petersburg.  Thirteen Coats seems to me an effort to make sense of senselessness, to create order from chaos, to fashion a story from a nightmare, or that process whereby the war veteran moves from Post Traumatic Stress Disorder into some sort of normalcy.

One might examine Russian twentieth century trauma from two perspectives; one such as is contained within the pages of The Black Book of Communism which enumerates the tens of millions murdered in the name of that twentieth century religion of horror.

Large numbers empty trauma of meaning. Stalin said that one death was a tragedy; ten-thousand a statistic.  The Russian Memorial is Russians dedicated to telling the story of Russia’s vast tragedy one story at a time.  Evgenii’s essay is one of the many Russians have been writing since the collapse of Communism to move somehow their memories from nightmare to narrative.

I am familiar with this literature, and I am reading more of it, as I prepare to write The Executioner’s Son, the 3rd novel in my Long War Series.

I’ve written a too-long short story (more than 8000 words now; I want them no longer that 5000), a story of a WWII veteran dying, and his son, a Vietnam vet,  a story for which the denouement currently eludes me.  Fingers crossed that I can finish the story before Patrice and I fly to Croatia on 28 October 2013…

…where we will live for a year or so.  I’m learning Croatian!  I know how to order drinks, pay for them, and order another round.  The official languages in Rovinj, Croatia are Italian and Croatian, so Patrice is tasked to learn the former and I, the latter.  Russian is allegedly 60% common to Croatian, but you much watch out for the ‘false friends’  (i.e., Deva=girl in Russian, camel in Croatian) rules.  Speak quietly and carry your big ‘tool.’