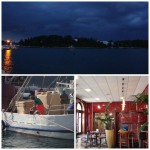 Patrice and I have settled in  Rovinj, Croatia, until at least 15 April 2014.  The first apartment we rented (12th century plague house) did not meet our needs. Patrice found another apartment, which meets our needs in spades.

These travel notes is an experiment  with how to capture my impressions.   Patrice’s writes a blog which tends towards the day-to-day, while mine tends to organize (and flog) my fiction.  However, I want to record my travels, have never had a good memory, am meeting new people (who somewhat resemble the Central Europeans among whom I grew up), am visiting interesting places (which do not resemble northern Wisconsin) and  writing.  I want to capture impressions which I may use in my fiction.

I have finished my second novel, Mountain Etude, in the “Long War” series.  I will publish it on 1 July 2014.

The third novel in the series, The Executioner’s Son, is written, but the story arc is a mess.  My goal is a readable draft by 15 April, when my wife and I move to a farm house in Ilmensee, Germany.  Mal Sehen.

We have hi-speed internet in the apartment. Double-edged sword, that.  By 1430 I have checked Facebook for the 14th time.  Turn off Wi-Fi for one hour?  Nhaw.  I think everyday, nay every hour, of my oldest daughter’s email address : Priorityz. (!!!!)  However, I need high-speed internet.  I had attempted to do all my novel research while in Madison. It didn’t work.  Internet permits me to live more distant from the UW Memorial Library,  yet still write the dense, deeply researched prose I prefer.

Cafe in the Hotel Adriatic

One can waste time. It matters not where you live.  Thus, Patrice and I on Sundays go for Kava so Slagom at the Hotel Adriatic (reminds us of a Viennese coffee house, where I have never been), jot down what we expect to accomplish by the following Saturday, build a work plan, assess our budget, then return the following week to reassess.  Our goals are sort of as follows:

At number two our lists diverge.

I (had) want(ed) to learn Croatian.  I had thought my fluency in Russian would help. it doesn’t, at least yet.  Word order is as important in Croatian as in English, whereas in Russian, not so much. The latter has elaborate verb conjugations and adjective/noun declensions that signifies the word’s function in the sentence. Thus, word order can serves euphonic, or poetic, but not necessarily meaning needs.   Though poets in any language struggle with rime and reason,   and each language produces but few poets whose best works the angels recite, be their language euphonious or not. Anthony Hecht, T.S. Eliot and Shakespeare have done just fine despite the clunky English language.  All for all its euphony, Boris Pasternak would suggest that the composition of his Lara Poems was no walk in the park. Жизнь прожить, не поле переидти.

So be it.  I will struggle.  I will learn ‘enough’ Croatian and read, translate, think in and about Russia,  Russian and the Russians (Why? Ah, I hadn’t mentioned. The Executioner’s Son is set in Suzdal and Moscow and the heros are Russians). Next report; one year from today.  My single personality flaw is that I am really uncomfortable not speaking the local language, and it drives me to master it.  I hate asking for directions if I can’t ask fluently in the local language.  Patrice, who knows me well, notes that I don’t ask directions in English either, but I think that’s unfair of her, don’t you?