Istria, February 2014, In the Morning

In December and January, Rovinj sleeps.  The days are overcast and rainy. The streets are quiet and empty. On the rare sunny day (or hour), the cafes on the square fill, and when the sun disappears, so too do the natives.   On 1 February, one hardly notice a change.  A few tourists arrive––three buses the first week of Feb, four, the third week––and leave, but always, it seems, more.  There is some date on which everything must be in order.

We arrived here on 1 November. The stair to our third floor apartment were in the process of being replaced. The stairs, our landlord assured,  would be finished when we arrived.  They weren’t. Text messages flew, punishments threatened and actions taken. Two-three guys appeared in the evening once-twice a week with a six-pack. A Beetle Bailey look-alike arrived to scrape and paint during the day. The caretaker, a sharp-tongued, stout and strong woman, chewed  butt; it must be done NOW!!!!  He’d light a cigarette, lean against the wall, agree his boss was useless, and they’d gossip about his mother and her ex-husband. Good on you,  Beetle Bailey.  No big hurry.   The owners were in the United States. We found another place on 1 December, the construction unfinished. I know this Beetle Bailey. We’re related. The crew trained in Gleason. I pass by that apartment now and then; the windows are taped over with construction paper, tools are visible still propped against frosted glass.  I’ll check again when we depart on 15 April. 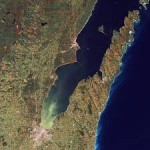 I had before likened Rovinj to Boulder Junction, Wisconsin. However, it is more apt to compare the Istria Peninsula to Door County.  Both are peninsulas; in both the rhythm of tourism soaks into the bones. Istria has been a tourist destination for at least 200 years and, with some free translation of the Latin, 2000 years. There is an ON season and an OFF season. In the summer one serves the tourist; in the winter one fixes things to serve the tourists. The young men––the electricians, stonemasons, carpenters, painters––work in the OFF season, or are unemployed. 15 June is the eternal, in-the-bones, drop-dead deadline. Medieval Rovinj is given over to the tourist; all construction must cease.

Our old building (circa 1500AD), located in the Stari Grad or Cittio Vechio (Old Towne), has thick walls and heavy shutters to create a silent night (save for the occasional party at Velli Joze (Big Joe’s) or when an Adriatic storm rolls thunder like cannon balls down the narrow and cobble-stoned streets and rattles rain on roof tiles.  Mostly, we sleep quietly.

I wake at 0600, slither silently out of bed so Patrice can sleep another hour, and make my coffee. I turn on the hot pot, which takes about four minutes to heat, and put in my contacts. Save for the Croatian language, we suffer two inconvenience. The first is the bathroom. Depending upon the wind direction it smells of the ocean or of the sewer.  The plumbing was installed under Communism. There are no gas traps.  Therein, my eyes will water either from eye drops or sewer gas.

I make pour-over coffee.  That first cup of coffee is the one struggle Croatia presents me. My sacrifice is thus:  The available filters did not match my holder.  Croatians use \__/ -shaped filters; my holder is like so; \/.  If I pour hot water too fast, the filter bursts and I have to drink coffee grounds.  Bummer.

My apartment door opens onto the Adriatic Sea. The bells of St. Euphemia call for the 7AM mass.  Squawking, the gulls follow the fishing boats back into the harbor, one of whom squawks as if some bully  has wrestled him to the ground and is twisting his wing behind his back.   The sky is the varied sea sky. I step  across Sv. Križ (Street of the Holy Cross) to look NW over the Adriatic toward Venice. As on every sea scape the scene is ever-changing; On still and overcast early February mornings it reminds of wet concrete, the sky and sea borderless, the islands like a mason’s tools strewn about; On the next morning the sea is fretful, breezes without direction, as if the sea is uncertain if its identity; come the winds the waves slap against the harbor breakwater and crash high over the offshore islands; another morning the rising sun reflects off the waters to form a highway of ten-thousand mirrors to the horizon.  Ten-thousand years ago, the Adriatic Sea within the Venice-Trieste-Rovinj triangle was dry land. When the glacier at my home farm melted (Antigo Lobe of the Wisconsin glacier), Venice and Trieste and Rovinj and Rijeka became harbors.

I head towards Marshall Tito square where the Konzum, the Croatian 7-11 (Kwik Trip w/o gas). Old men sit beneath coffee-house awnings with their espresso (6 kuna vice 8.50 for cappuccino) and cigarette. Grey and overcast, the coffee-house interiors occupied; sunny, the outdoor tables fill as the sun rises. Whereas, this year it has been freezing Arctic Vortex cold in the United States, the Jet Stream brings mild temperatures and rain to the Adriatic.  The Atlantic seaboard countries––England, France, Portugal and Spain––suffer flooding.  Skiing the Alps is good this year. In the Balkans, the February rains are more or less gentle and more or less constant, the fronts interspersed was clear to partly cloudy skies. Towards the end of February the rains began to diminish.   I buy two (nougat-filled) brioche.

After brioche and coffee, Patrice goes to her computer and I go to my coffee house as students exit through medieval town gates. European students look like North American students.  The primary boys are as coordinated as puppies, trip over cobblestones and wear scuffed shoes. Their female peers seem older, as it is the world over, and can barely deign to step over them. Ugh, boys. They have cooties.  High school kids follow.  Whereas the primary school girls dress rather brightly––polka-dot pants, red coats, knitted stocking caps, the teen girls dress IAW the European & North American teen-age dress code­­––worn blue jeans and dark ski jackets. God-forbid that they should stand out.

I read ‘Coming Events” posted on large plywood sheets with water-soluble paint.  The January-early February were poorly attended; heavy rains washed away the announcements.  I next read the Gandusio Theater movie marquee, the movies mostly in English with Croatian subtitles.  However, the posters are in the Croatian language, difficult to puzzle  out. We rely on the actor names: American names = American movie; Croatian names = Croatian movie (we also have seen some beautiful and sophisticated Croatian-made movies).  I’ll see anything with Meryl Streep; I’ll try to see anything with  Julia Roberts, maybe.  We saw August: Osage County a few nights back and we––Patrice, I and the Croatians and Italian movie-goers––crawled  emotionally drained from the Gandusio.  Julia Roberts, m’God, she played a role worthy of  the promise she had shown in Mystic Pizza and hinted at in Erin Bronkovitch (everything Meryl Streep does is Oscar-worthy). My movie review?   See August…,but bring vodka/valium if family conflict stresses you.

Cafe Al Ponte: 100 years ago, a bridge joined the mainland here with the Island.

By 0800 I am at the coffee-house.  I chose one of three; the Viecia Batana (Old Boat) (mostly men), the Cafe am Pont I (The Cafe at the first bridge) (older women speaking Croatia) or La Riva (The Channel)(older women speaking Italian). The Viecia Batana is darker, heavier; the First Bridge Cafe, lighter, brighter; La Riva has infra-red heat lamps. Although I understand little Croatian, I understand them; the men speaking politics (local, regional, national) and how irresponsible the how contractors are nowadays, the women, children, grandchildren, relationships.  It is the difference between Merrill, Wisconsin’s Pine Ridge Restaurant vs. The Checkered Churn vs. that diner on Merrill’s East Side, the name of which I now forget.

The Croatia I’ve described in this post is idyllic. I suppose at this moment that is so; it is not always so.   I work on my novel, The Executioner’s Son for two or so hours every day except Sunday. The first scenes take place in Suzdal, Russia, a medieval Russian religious center, which, since this scene takes place in 1953, is a Gulag.  Uncounted men and women were done to death here, ––execution, cold, disease, starvation. To this day the fields and forests around the town the spring frost brings the dead back to the surface.  Massacres, the Red Terror, drench the landscape  in unutterable sadness, but later, in the next message.