In her homeland, in my homeland 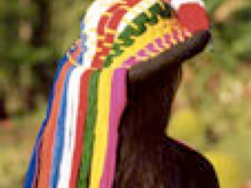 On 1 October I served as a Wisconsin Book Festival usher for Kao Kalia Yang, http://www.kaokaliayang.com/ a 28-year-old passion-filled Hmong woman born in one of the post-Vietnam refugee camps in Thailand.
This is an exceptional young woman.
As part of a larger presentation she did a writing workshop for pre-teens. The kids wrote. A lot. Why?
She is small. Ten-year old boys look her in the eye. She calls the young girls her sisters. Born of extended family Kao grew up among swarms of children and exudes a sense of ‘older’ sister. The older sister knows right from wrong. She loves you, and it is not right to cut up, don’t you think? Writing is creation, and we are respectful in its presence, aren’t we? There is the steel in her spine and the fire in her heart. She is a Hmong warrior.
http://picasaweb.google.com/lh/photo/BpiaBW-4jsnRKFQAW4mz3g
From 6-7PM she showed a poignant self-produced film “The Place Where We Were Born” describing her family’s refugee camp experience. It touched me––hard. It was as if I were a child listening to family tales while sitting beneath the kitchen table. An uncle was born in Yugoslavia; my mother in Chicago. My relatives too told stories of loss, longing and death in the refugee camps in Europe, they who fled the murderous left and right wing one-party dictatorships patterned on V.I. Lenin’s Soviet Russia. Hammered by this murderous religion of communism, refugees of all hues made their 20th century way to our hard, and in the end, welcoming country.
My connection to the Hmong is even closer. In 1970-71 my unit flew reconnaissance missions along the south Laotian passes and valleys. We supported joint US-Hmong patrols in danger. The Hmong were courageous soldiers. If and when they retreated, it was in good order. I lost contact with Laos when I left Vietnam in late 1971.
Many years later the Hmong appeared in northern Wisconsin––Wausau, Stevens Point and in my hometown, Merrill. They were as welcome as any new immigrant group. Hmong hunters gained grudging respect among the hunting community. “They shoot a deer, they don’t stop till they kill’ it.” There was conflict along racial lines, some violence, but among ‘us’ it was understood that they fought for America and that these tribesman had not left their warrior souls in Laos. Hmong kids, born in the jungle and the camp, won academic contests, scholarships and spelling bees. Every so often a Hmong young man would kidnap a marriageable girl; this was against the law and the boy went to Lincoln Hills. The immigrant like earlier immigrants went to college and to prison. Hmong girls and boys now marry white boys and girls. It’s the American immigrant experience, maybe a little faster into the mainstream than my Slovenes, Croats and Serbs.
I will follow Kao Kalia Yang’s creative career. She is a young woman filled with love and anger, burning passion and frank awe at what America has given her people, filled with the senses and words and stories. I look forward to how she might reorder the universe.

Stay up to date, sign up for the Newsletter today.

Follow "Liars and Storytellers," a non-fiction book, as I write it. Your critique as it unfolds is welcome.