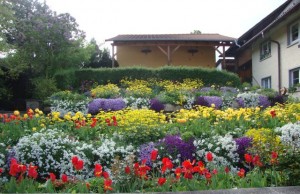 Patrice and I have been in Illmensee, Germany these few weeks.  I was stationed eight years in Germany. Christopher and Michelle were born here, Robert, Marcia and Deborah had their escapades and I count myself a Germanophile.  I can remember only one unpleasant day, a wet snowstorm in 1972 when my car broke down on the Berlin Ringstrass and learned the word  Abschleppdienst.

We are not unaware of the other, darker German landscape. It is interesting how one sees what one is prepared to see.  For example, at my farm, if I see at dusk an unfamiliar smudge along a distant tree line, I know what it should be by its shape, behavior and what’s expected. A stranger may be astonished, but shouldn’t be. It can only be a white-tailed deer, which presents itself differently than a black bear or wolf or coyote (I once mistook a lady on a bicycle for a charging deer, but I was right often enough).

We have become acquainted with older, recently remarried American couple, Mike and Nancy, he a torn and shredded Air Force EOD sergeant (medical discharge, eh?), she a California computer programmer. He and I gaze around and see battlefields; she sees meticulously maintained and garlanded houses fronting hillsides in bloom. Both visions are there, though the war wounds are clear enough.  They are memorialized. 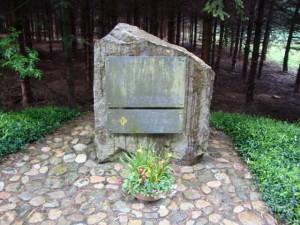 Forest memorial to the young Pole the Nazi executed near here, Illmensee, 1941

Speech stone be not silent… Bring the truth to light… Two ventured in a sinister time… But death stood up….brought its awful suffering…She was taken to the camps… He was beaten, hung and and buried.

Memorial to the Wehrmacht 5th Jager Division, mauled in fighting around Illmensee, Russia. Division veterans held annual reunions at this monument overlooking the Illmensee until a few years ago. The remaining 5th Jager veterans are too few and decrepit to meet further.

Illmensee, the town, is also Illmensee, the lake. In 1934 the Wehrmacht recruited and organized the 5th Jäger (light) Division from  Illmensee and the surrounding area. It was pleasant duty, I would guess, until it was assigned on the left flank, Operation Barbarossa. When German advance reached its apogee, the 5th Jager found itself in the Russian swamps between Lake Ladoga and the Russian inland lake called…you guessed it, Ильменское Озеро, or Lake Illmensee. They fought there three years, conditions brutal, winter temperatures to -54C, in summer to +100F, with Soviet troops attacking desperately and constantly.  The 5th Jäger lost 1500 of a standard light division TO&E of about 5000 men.

The Soviet Army indeed attacked fiercely. The 5th Jager was at Leningrad (St. Petersburg); the siege lasted from September 1941 to 1944. By its end, some 632,000 people are thought to have died with nearly 4,000 people from Leningrad starving to death on Christmas Day, 1941.  My Russian friend, the then infant Evgenii Belodubrovski, was on the other of that line (See here). His father died of starvation on that winter day.

This is Central Europe.  It is a heart-stoppingly beautiful and historically ravaged landscape.   I am reading Bloodlands: Central Europe between Hitler and Stalin by Timothy Snyder. It’s one heavy slog; I recommend it, but not before bed.