Spirit Falls is a coming-of-age novel set on the empty and hardscrabble borderland between Michigan’s Upper Peninsula and northern Wisconsin, a story of childhood friendship growing into profound love.

The gypsy-like refugee Marina Svetaeva unexpectedly joins Ricky Belisle and Marie Jeanne Charbonneau at curtain call on the night of that last Christmas program. The stranger’s arrival looses a cascade of events that ultimately finds Ricky carrying M.J. in his arms across the Great Bogus Swamp into the teeth of a 100-year Lake Superior storm.  If she survives he vows an ultimate sacrifice in expiation of his shame.

Ricky Belisle is a boy born to first-generation immigrants.  They bring with them the beliefs, manners and stories of the homeland and in so doing they create a disconnect in Ricky that forces him to begin the exploration that will eventually take him away from the land that has leached into his bones.

Marie Jeanne Charbonneau, “M.J.,” a French-Canadian tomboy, is his best, his only, friend who shows Ricky that the world is wider than he thinks and that much of life takes place in the space between the words. Their relationship sparks the hunt for truth within themselves. 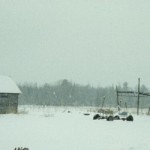 The land is an important character in the novel as it seeps into Ricky and identifies both his strengths and weaknesses.  He must learn to overcome his fears and finally learn to leave the place that feels most familiar and safe.

On the eve of the winter solstice, the coldest night of the year, Marina Svetaeva, green-eyed, black-haired, beautiful and wounded, a fragment of war-torn Europe, arrives.  Her arrival begins Ricky’s journey from home.

Spirit Falls is the prologue to the trilogy Townsend is writing about deception between nations and within families, war and peace in 20th century America, the families who fought those wars,  the lies we accept and the ones we don’t.